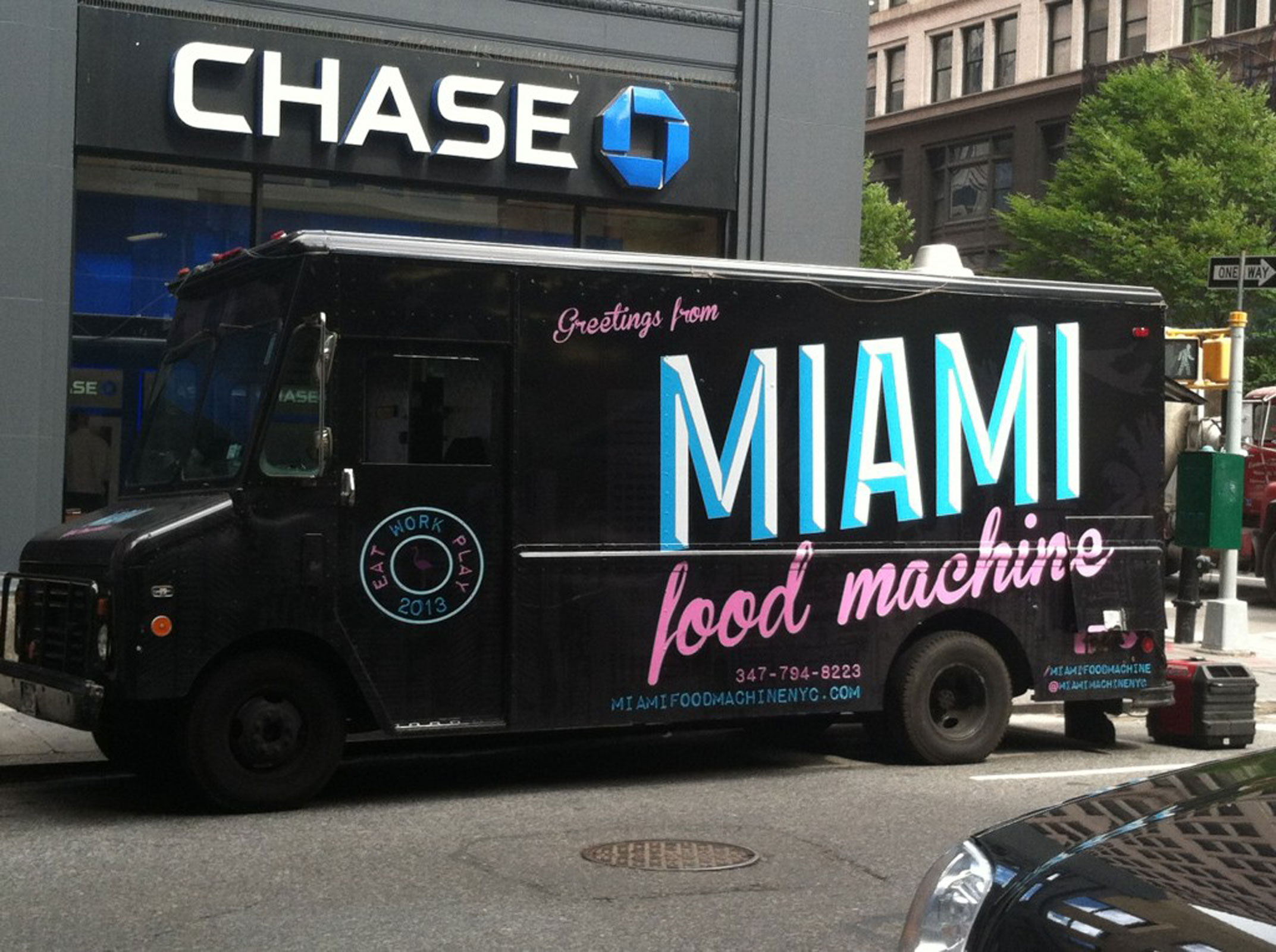 As cool as the truck looks, the food is even better

Highlights: The sides may be the best I’ve had on a food truck

Lowlights: Very few, but the meat was slightly dry without sauce

The old Bongo Brothers truck re-branded earlier this year to the sleeker Miami Food Machine. While I sadly never had a chance to try this Cuban truck as Bongo Bros, I have been back to Miami Food Machine several times. There are not an abundance of places to get Cuban food in my area, so whenever Miami Food Machine rolls around I consider it a treat. The amazing Cuban dishes keep me coming back.

305 Ribeye platter with some fantastic sides.

Man, I really like the food served here. For starters, there are not very many places one can get some quick Cuban food. Instant points for originality. I ordered the 305 Ribeye bowl based on their recommendation. They also offer it as a sandwich, but I wanted the platter since it came with some good stuff – black beans, onions, salad, and sweet plantains. More on these later, they deserve their own section.

The meat was thinly sliced and covered in a delicious chimichurri sauce, served over rice. The meat was slightly dry if you got a bite without sauce – but that will be the extent of criticisms for this dish. The green chimichurri sauce was very sweet and flavorful. It was slathered on top of the meat, which was mixed with onions. Getting a bite that had meat, onions, and ample sauce was like was throwing a fiesta in your mouth. The crunch of the onions went so well with the softness of the meat. There was plenty of sauce but I think I could have had double the amount and not be overwhelmed, it was that good.

Alone, the meat itself probably wouldn’t be filling enough. The sides were what really set this meal apart. Fried plantains, which are going to be tough to find anywhere, let alone on a truck, were the crown jewel of the sides. After my first bite, the sweetness caused me to let out an involuntary “Mmmmm, mmMM!” The people around me were startled, but I was too enamored with this orgasmic side to care (the exact words in my notes are ‘DAMN, this is good’).  The plantains were burned on the outside yet so soft on the inside. The contrast between the two made for a great and surprising taste. The outside tasted like candy.  The platter came with two plantains which was enough – they are very thick.

Since childhood I had successfully avoided black beans, but I tried it for the first time earlier this year at a previous MFM stop. The beans are pretty standard, but are a great addition to this meal. Not to mention the bean juices spilling onto the rice makes for some awesome mop-up bites at the tail end of the meal.

Amazing sauce, succulent meat, and probably the best sides that I have had on a truck yet. This meal was phenomenal. 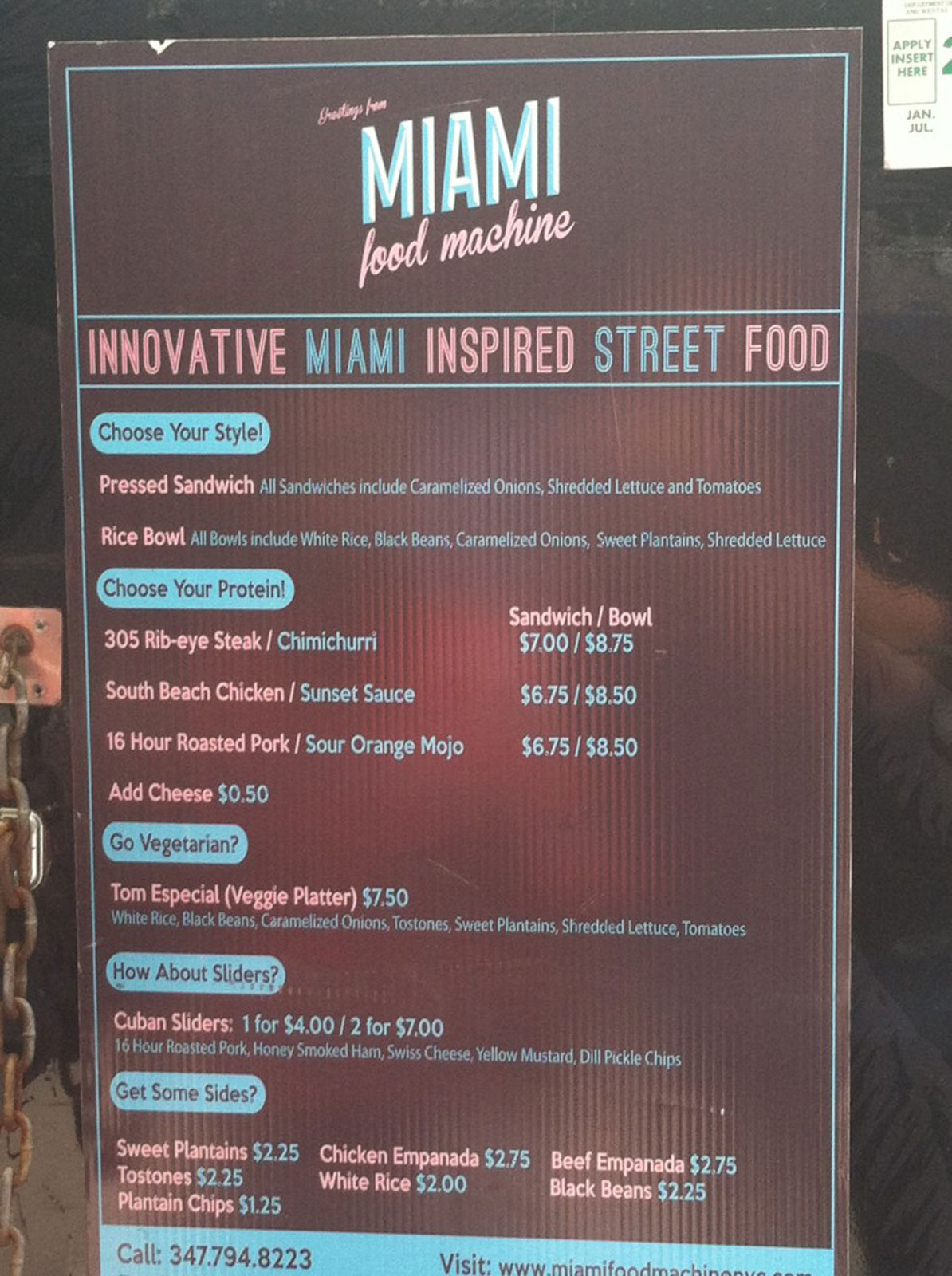 A taste of Miami in Midtown

I paid 8.75 for the platter, which for the amount of food was a very good price. The sandwiches were $7, which is also on the lower side for truck sandwiches. I appreciated how they included all of the sides as part of a combo meal rather than having to buy them as add-ons. It was essentially $1.75 for the fried plantains and a hearty portion of black beans. That was very good value.

They included napkins and utensils when they handed over the meal, which is always great. There was barely a wait even though I went during the lunch rush. The workers were, of course, very friendly and helpful. They didn’t warn me how good the food was going to be, though!

The truck is a just a very cool looking truck, for starters. The food itself was also presented very nicely. The beans were perfectly in place on the right, the meat and onions were in the middle, and the salad and plantains were over to the left. Every part of the meal hashed out in precisely the order I would be eating it. And if I wanted to mix, I would just mix.