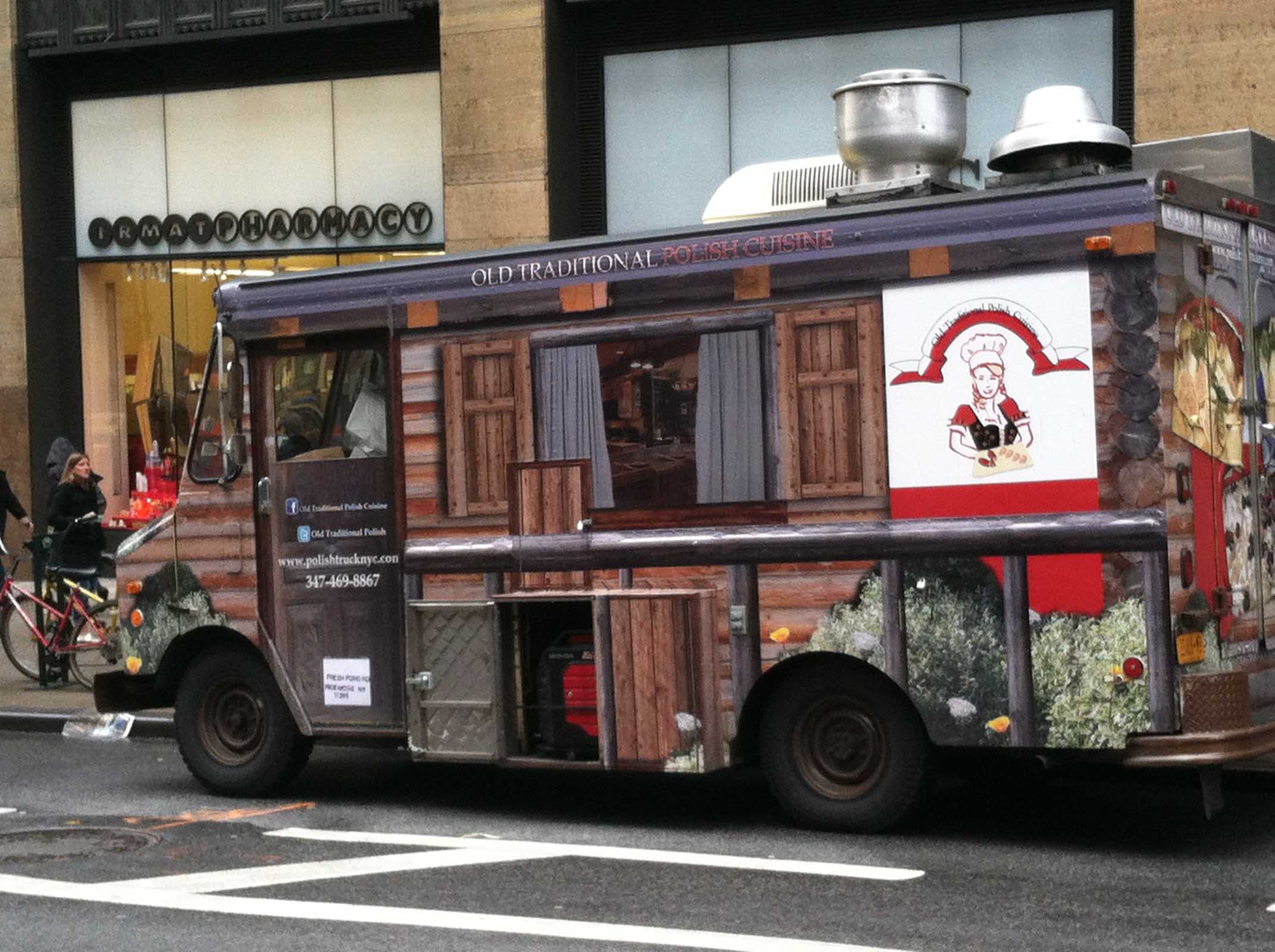 Amid all of the buzzy concoctions and off beat food pairings you find on many food trucks, it is nice to occasionally have a dish that harkens back to a simpler culinary time. I had my eye on Old Traditional Polish for a while now, but was always jussssst a bit out of reach to make the trip on my lunch break. But it seems they have added a new East 30’s location to their repertoire, so I made my way over as soon as I had a chance. As a relative stranger to Polish food, I was intrigued to see what I was getting into.

Right away, I was blown away by the portion of this meal. I ordered the Meat Lover’s Combo which came with a grilled kielbasa and four meat pierogis.  The meal also came with two big slices of bread, a sizable pickle, and a healthy heaping of mustard to dip. The kielbasa was sliced in increments to make it easier to eat. The kielbasa was slightly charred on the outside, which gave it a nice subtle crunch. The inside was meaty and the kielbasa was still hot when I got back to my office to chow down. It was better hot, naturally, then when it cooled down. The mustard wasn’t spicy but was nice to have to dip, even though the meat didn’t need to be dipped or on bread to be delicious. 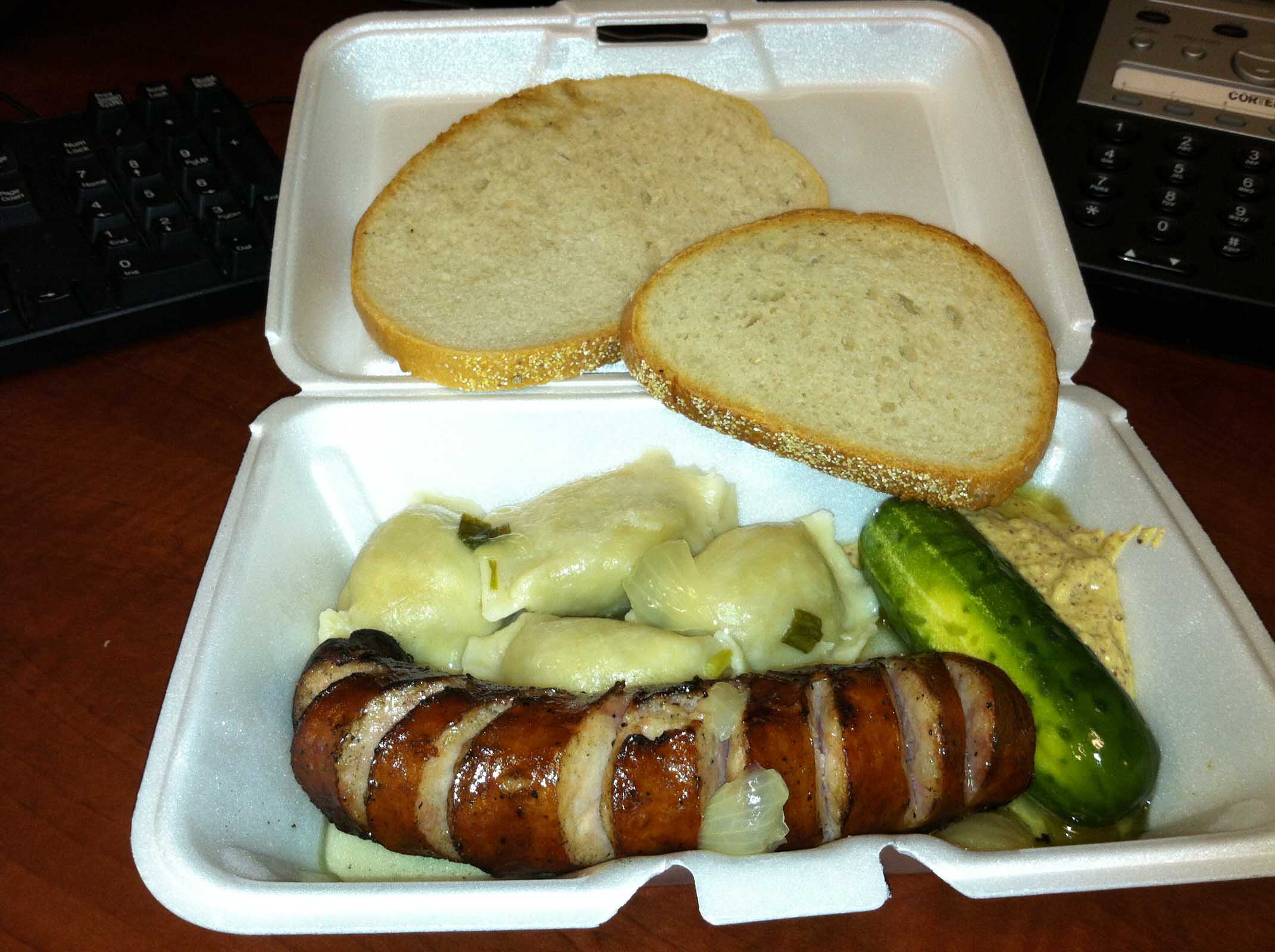 The meat pierogis were great to pair with the kielbasa. The dumplings were stuffed with meat – there was no empty space here. There seemed to be a bit of oil drizzled on the pierogis which added some flavor them.  While it was filled with beef, the beef was slightly dry. The oil did rectify some of that, though, and the grilled onions covering them were nice to have. The pierogis, for some reason, got more enjoyable as the meal went on while the kielbasa got less enjoyable. There was a lot of food here. I may even think there was too much food, but when you go meat lovers a lot of food should be expected. There are not many places you can easily get this type of food on a lunch break, so extra points for originality for OTP. I would recommend it to anyone who is looking for a satisfying lunch.

I paid $10 for the meat lover’s combo, which was just $2-$3 more than if I only ordered kielbasa or pierogis.  For the (unnecessarily large) amount of food, it was a decent price. You definitely didn’t feel slighted as you get what you pay for. It is still 10 bucks for lunch though, which is on the higher side.

The truck was crowded when I first arrived and the line was very unkempt. There was a mix of people waiting to order and waiting for their food with no apparent coordination. I waited for a while at the counter without getting served, after I made it to the front. Once I was served, the people were more than friendly. It was busy, and we can forgive the slow service during this lunch rush as I noticed them frantically working in the truck. The confusing line needs to be fixed, though.

The presentation was phenomenal. To start, the smells emanating from the truck were awesome. When I first opened the box, I was taken aback by how cool the setup was with the sliced kielbasa and perfectly laid pierogis. The bread and separated pickle and mustard made for a nice layout. Only criticism is that my pickle was served on top of the mustard, which means I was having a mustard pickle whether I liked it or not.