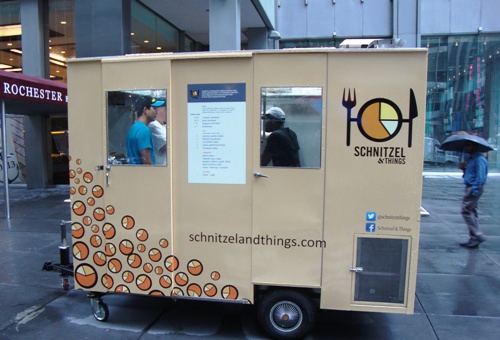 Lowlights: So little sauce for such a big schnitzel. No one wants a dry schnitzel.

Ever since my first trip to Bavaria I have had a soft spot in my heart for schnitzel. It’s not something I have often, but it is always a treat when I do. When the truck Schnitzel and Things made its way to my little corner of midtown, my lunch plans were set. Not only would I be getting some schnitzel, I’d also finally have the answer to my year long question about this truck: Just what are the Things?? Today’s lunch was going to be a treat.

I ordered the chicken platter with a side of fries and cucumber salad. The sauce was spicy sriracha mayo, based on the recommendation of the server. It seemed like the potato salad was the real special side here, but I loathe potato salad. It wouldn’t have gotten a fair shake based purely on the face that it was potato salad. 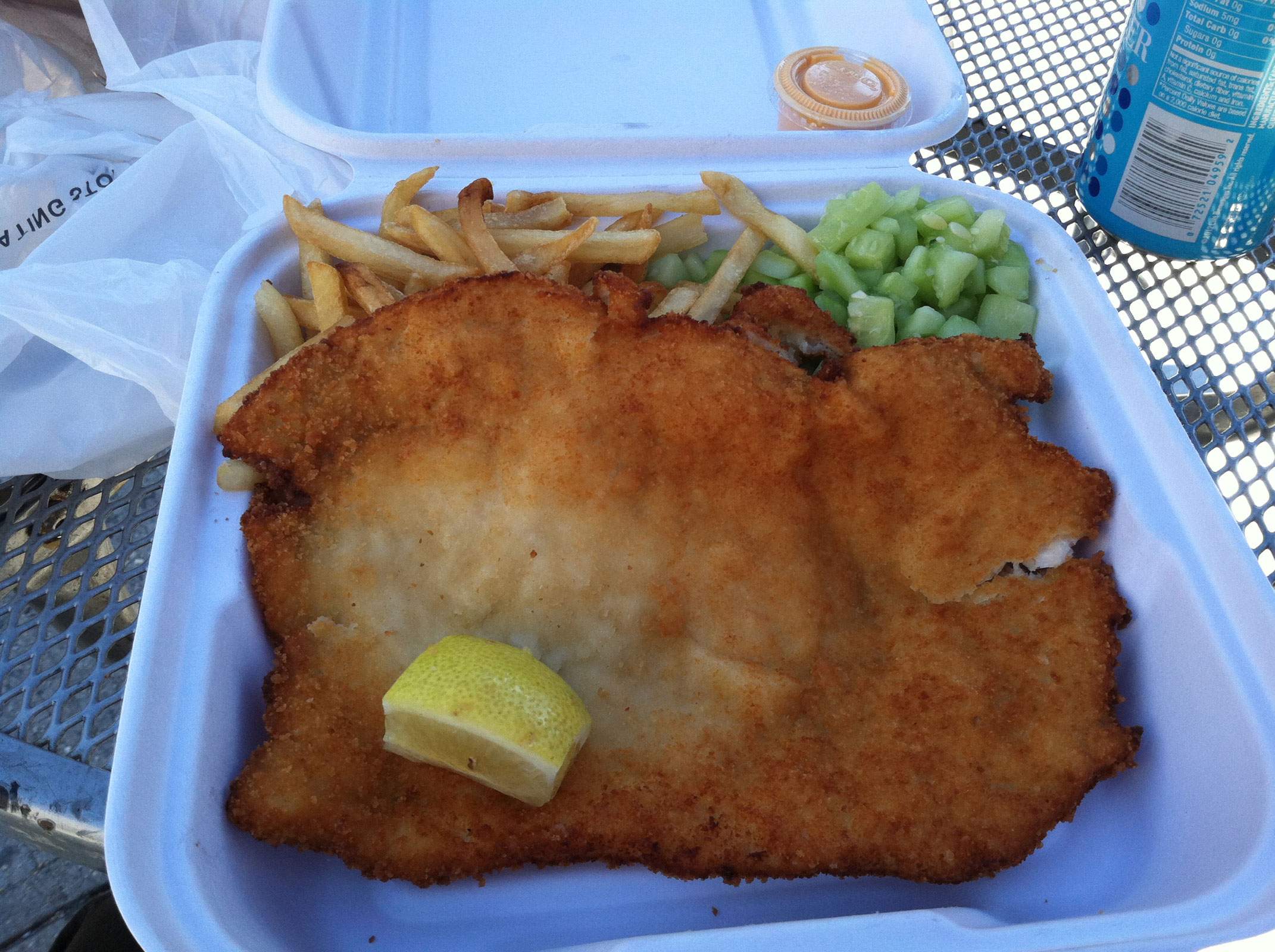 Big schnitzel – and what is that in the back, a sauce cup for ants?

The chicken schnitzel was very crispy but thin – and a very large portion. It was nicely breaded and tender on the inside. They included a lemon with the meat which was a nice touch. The hint of lemon on each bite really added to the meal. You need to use a fork and knife to eat it. It is kind of annoying to eat a lunch with a fork and knife, but with schnitzel you know what you are getting into. Just be sure to have a table to eat at to make it easier.

The spicy sriracha mayo was good but not very spicy. They also skimped on the sauce HARD. For the size of the cutlet, to give a tiny shot-sized cup of sauce is very upsetting. There wasn’t enough sauce for every bite meat, and that was a huge problem. I ran out around halfway through. Also, the sauce didn’t quite match the meal. Schnitzel and spicy mayo just doesn’t mesh, and I’m a huge fan of anything spicy. But this combo just didn’t feel right.

The fries were skinny, kind of like a McDonald’s fries. They could have used some salt and were actually a bit soggy. The cucumber salad was just a bunch of diced up cucumbers on some sort of oil. It was good, but unspectacular. There was a lot of it and that many cucumbers started getting old like halfway in.

They get a few points for being the only easy way to get some quick schnitzel – here at RTT we love originality. You aren’t going to get any bold flavors or interesting combos with schnitzel, as to be expected. But this lunch was utterly forgettable. 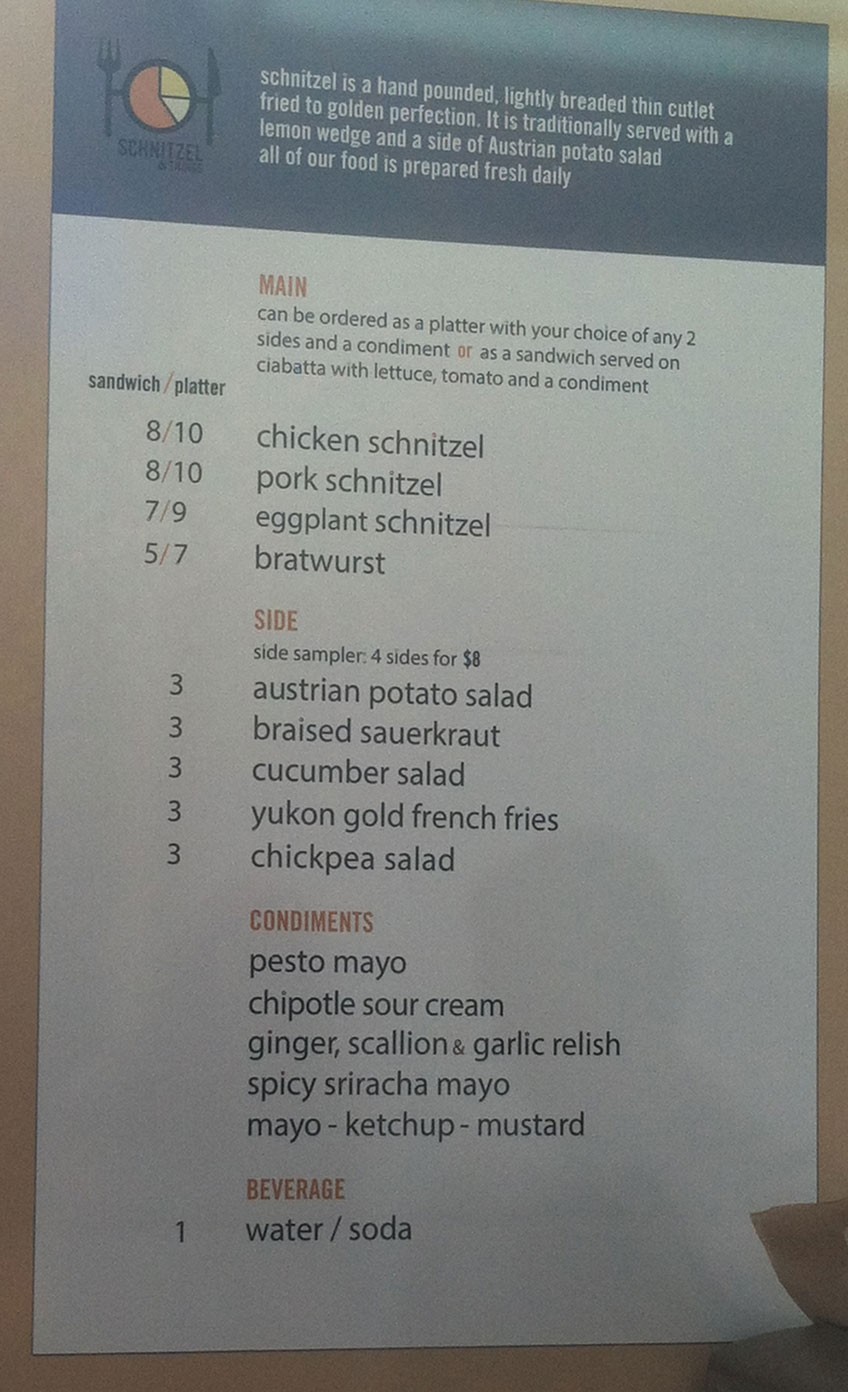 Order some schnitzel, order some things

The schnitzel and two sides cost 10 bucks. For what is essentially a fried chicken cutlet, you can do much better than that elsewhere. It would have been $8 for a sandwich, and looking back that may have been a better option. Separately sides cost $3 each, which is average. You’re not breaking the bank at Schnitzel and Things but the value isn’t really there.

They supply the fork and knife to eat with which was very good – nothing worse than sitting down and missing the utensils you need. The gruff server gave me some suggestions and I followed them, for better or for worse. The line was manageable and the wait wasn’t terribly long.

I got this meal from the S&T cart, which is an offshoot of the truck you see driving around from time to time. The cart was quaint, very unassuming on the corner. The food was separated nicely, with a big section for schnitzel and two hollowed out areas for the fries and salad. The sauce was served in a small plastic container (thimble-sized). The juices from the cucumber salad overflowed onto the fries which was not good. The fries were already a bit soggy, cucumber juice wasn’t making that better.