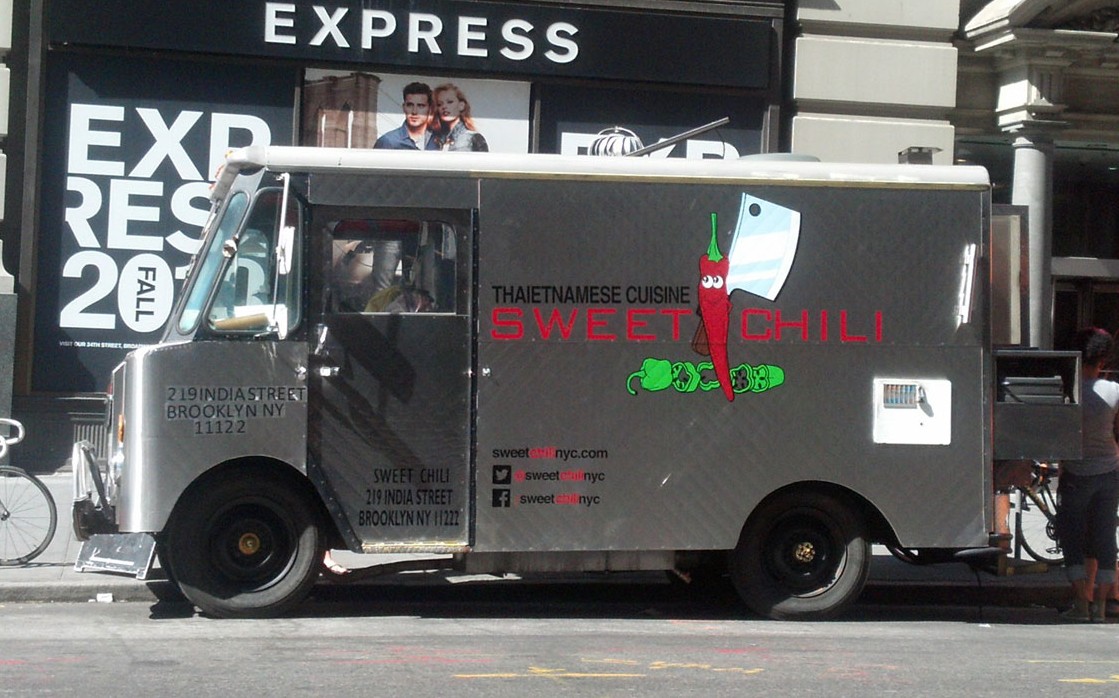 Sweet Chili in all its glory

Lowlights: The jasmine rice served little purpose, and there was too much of it.

We first got a taste of Sweet Chili at the 2013 Vendy Awards, and it was one of the trucks that stuck out the most. Run by top chef finalist Lisa Fernandes, Thaietnamese specialist Sweet Chili has made quite an impression in its first year on the food truck scene. Since that first sampling, we vowed to get back as soon as the truck made its way to our neck of the woods. Well, they finally did, so our lunch break was suddenly dedicated to some sweet, sweet chili.

I ordered the Heavenly Beef, which is coriander marinated sirloin beef with sriracha and thai basil. It came with a Bean Sprout salad, which was covered in 3 flavors of sauce, oranges, thai basil, mint, and cilantro. The dish was served with some standard jasmine rice. The marinade was delicious; it was the first thing I noticed as soon as I bit into the beef. There was a nice little kick at the end of each bite that added some zest. The meat was thick, much thicker than it looks. But it was also a bit chewy. They could have given some more meat as the portion was not quite large enough. The jasmine rice, since it was positioned to the side of the plate, served little purpose. It would have been great if the meat was served totally on the rice, so some of the sauce and marinade seemed into the rice. Instead, most of the rice was just plain and bland.

The sprout salad was surprisingly good. I say surprisingly, because it was really just a bunch of sprouts. I didn’t expect much. But the 3 sauces they put on it meshed together to make a sprouts the most flavorful part of the meal. I really like the spice that was present in each bite. The little bit of rice that was under the sprouts was phenomenal, because it mixed with the sauce. They should have put this sauce on all the rice. We really wanted to try the coconut candy, but they were all out. Kind of a bummer especially seeing as we were there during the heart of the lunch rush.

Since we tag-teamed this truck, we also had the opportunity to try out a second dish, the Honey Chili Pork paired with the green mango salad. Although this dish was also pretty tasty, it suffered from many of the same shortcomings of the beef. There was too much rice, and it was under seasoned. And although the pork was covered in a delicious sweet glaze, the chunks were at times unnaturally chewy. Just a bit too fatty. Similarly, the mango slaw was the standout of the dish, bringing a crisp, fresh-tasting texture to the meal. The mango really came through nicely and did a good job of tying it all together. 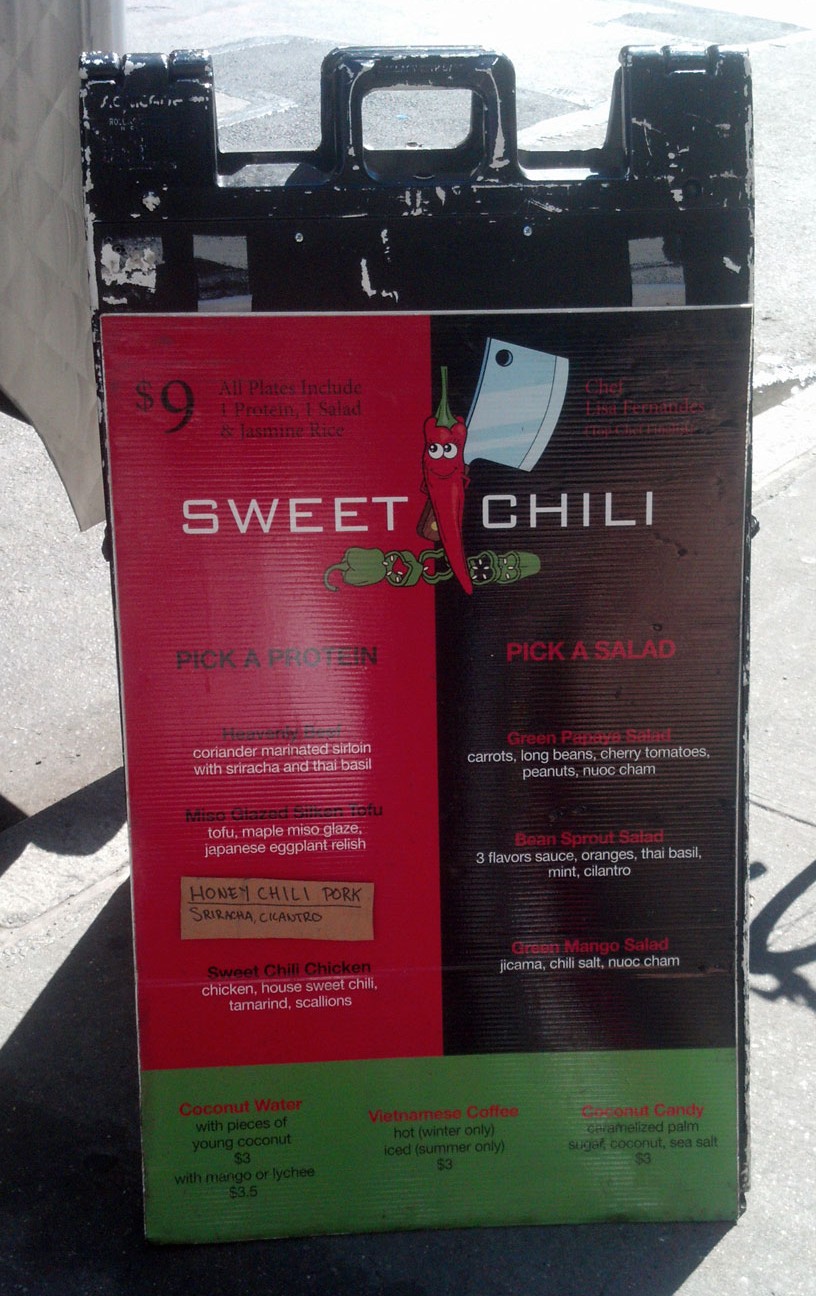 Choose a protein, served with rice and a side

It cost $9 for every plate they offer, which all come with a protein, salad, and rice. It sounds pretty decent, but the portion wasn’t great. For $9, I would like a bit more food. It’s not outrageous or anything, but there is no value here.

As always, the servers were very pleasant. They offer a frequent buyer card with which you get a free meal after 11 purchases, which is a great program for their regular customers. This should help create some loyal customers and at the very least act as some good advertising for the truck. The wait was a little long but not terrible. My biggest gripe was that they only gave one napkin. I blog about food yet by no means am I a neat eater. One napkin will never suffice.

It was presented nicely in a rectangular Tupperware, with the sprouts off to one side, the meat in the middle, and the rice on the other side. It was pretty easy to eat with a fork and the truck was a good looking truck. Not to mention they have a pretty cool logo.