A Cart with an Attitude. Rawr!

On my first return trip to self-proclaimed uptown food truck oasis (50th between 6th and 7th), I had my sites set on one cart in particular. I had been reading up on this one for a couple of weeks, anxious to try several of its tantalizing food items. It seemed they had put together a great menu with tons of delicious offerings for its customers to choose from.

Did the cart live up to my [self-induced] hype? Unfortunately not. 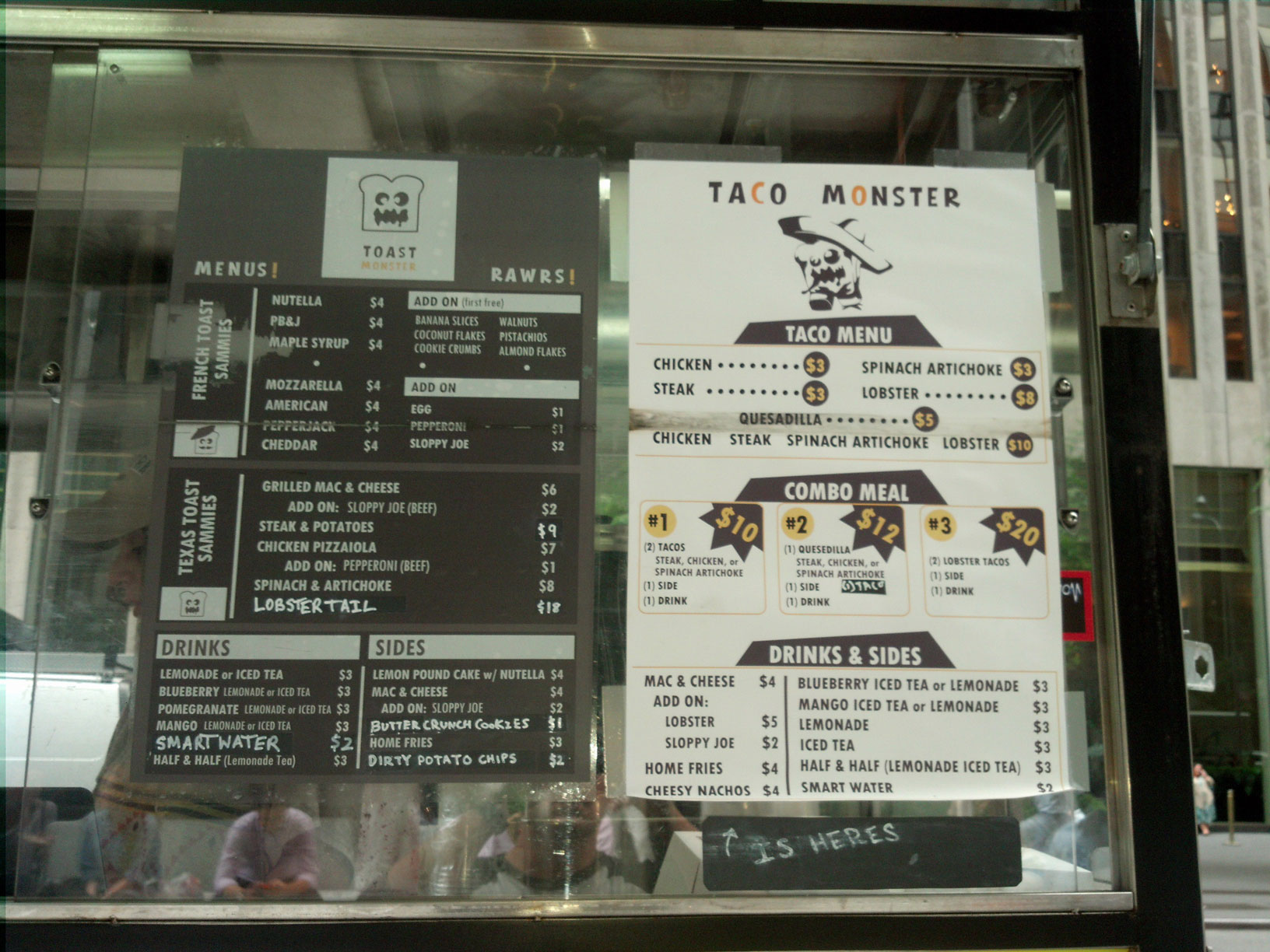 Even though I was very intrigued by the tacos, quesedillas, and lobster grilled cheese, I ended up going with my gut choice, the grilled mac and cheese on Texas toast with a sloppy joe add on. The sandwich itself was pretty substantial, served up between two large pieces of bread. It was presented with a nice robust char, that was complemented nicely by the buttery flavor of the lathered up bread. I did find myself, however, wishing that the toast was a little bit crunchier, as some bites were a a little soft.

The mac and cheese was okay, but really nothing noteworthy. I’m a bit of a stickler when it comes to pasta, and there’s nothing I hate more than overcooked pasta mush. While this mac wasn’t an egregious offender, it was a bit too mushy on my palate.

The first bite I took was all mac and cheese, as well as the next few that I took. It wasn’t until I hit the sandwich midpoint that I actually hit the sloppy joe. This really pissed me off. The combo of the two ingredients was admittedly, delicious. But the poor allocation and improper placement kept this sandwich from hitting the next level. Damn shame.

On to the home fries. While I loved the gravy these were served with, it was again, poorly allocated. I had less than five bites that contained the sauce. Other than that these were not much more than straight-up potatoes.

Eight bucks for this sandwich was largely standard-fare pricing, with a few standouts such as the savory options that were four bucks for a french toast sandwich. The sides were also pretty reasonably priced, all clocking in below five bucks. Three bucks for the home fries won’t ruffle any feathers. Lobster seemed a bit overpriced, but I guess that’s why I didn’t get it.

My wait time for Toast Monster was way too long. I spent close to twenty minutes waiting on a line of approximately seven people. I watched Big D’s (which was directly adjacent) rip through a line double the size in half the time. I realize the cart is probably much harder to manage, and staffed with less people, but you still have to do better than that at lunch time.

Now for my biggest gripe about this cart: the portion size. As I’ve said before, I’m willing to spend three maybe even four bucks on a side as long as its worth it. If it brings some new flavors and interesting additions to a meal, I’m all for it. But sometimes, trucks use sides as a vessel to sap a extra few bucks from its customers. This was very much the case with toast monster. I ordered the home fries, pictured on the bottom left. The portion you see in that small cup is exactly how I received them. There was legitimately one fifth of a potato used to create this side. Infuriating. 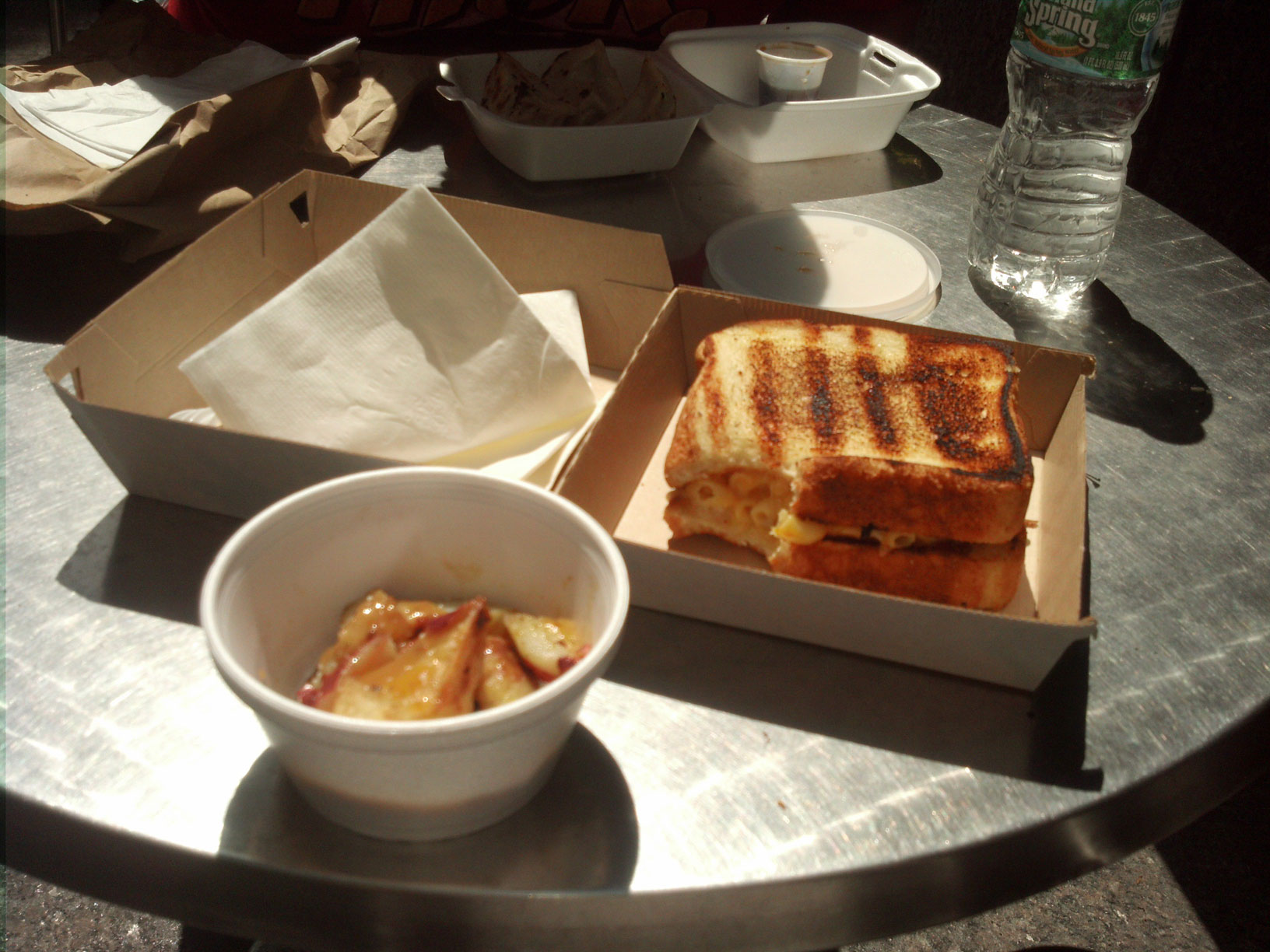 A Good Sandwich, and a Joke of a Side.

Although my trip to Toast Monster was varied, I will probably give it another shot in the future. The menu still intrigues me, and a Nutella french toast sandwich would be hard to turn down any day of the week.