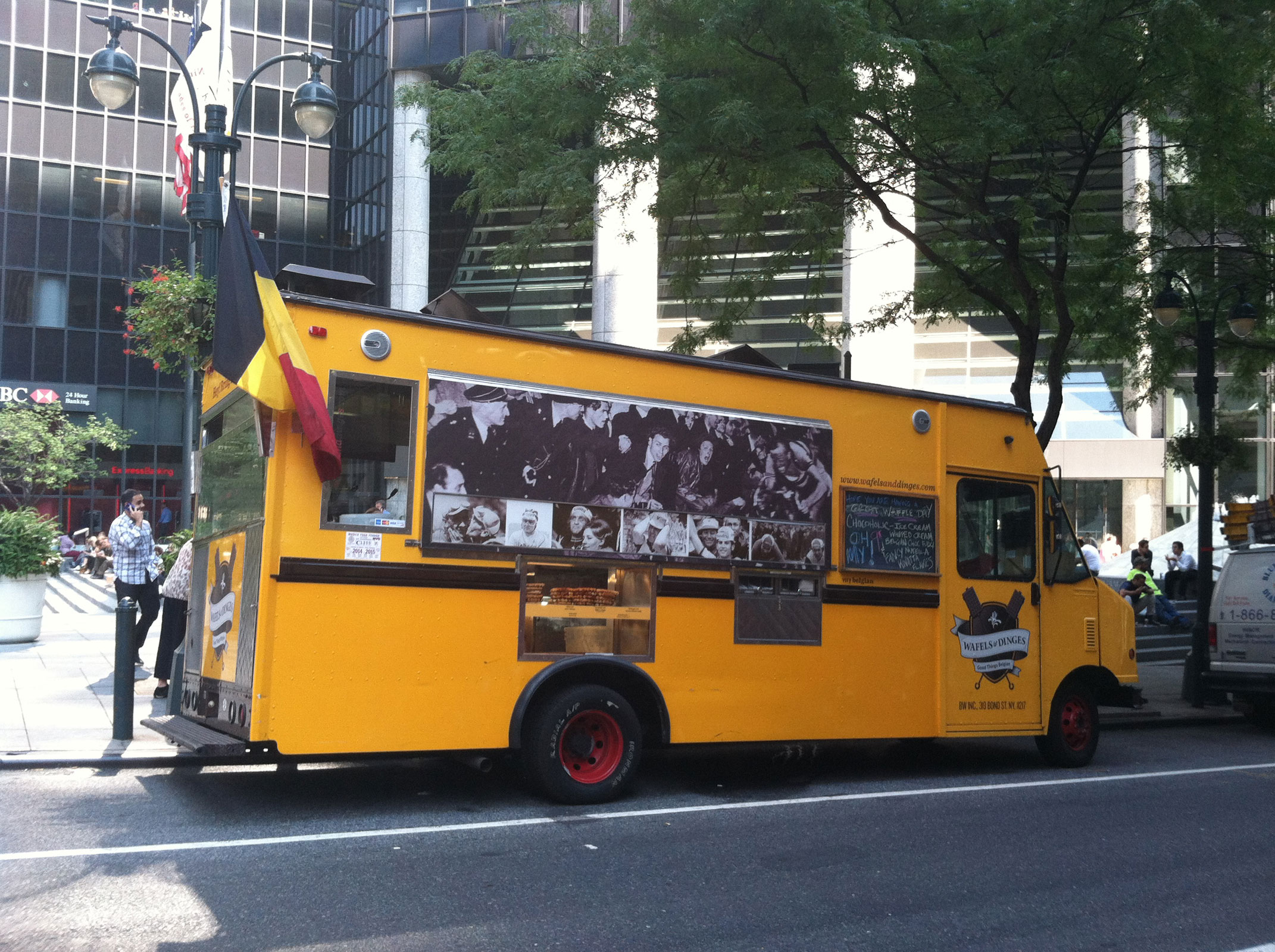 Highlights: Bacon baked INTO the waffle

Lowlights: Not enough pork, too much slaw.

Wafels & Dinges is one of the most recognizable food trucks in New York. When I first started working in the city consistently, W & D was the first food truck I saw. Belgian waffles readily available on the street for the masses, what a fantastic idea! Chances are you have run into Wafels & Dinges at some point – there can be up to 6 trucks or carts on the road at any time. And they are tough to miss too, with their bright yellow exterior, huge waffle replica, and a proudly hung Belgian flag. Recently in the mood for something different, I checked out Wafels & Dinges to try their BBQ Pulled Pork Bacon Waffle.

Before I start, I should say that W&D is probably best treated as a dessert truck. The legit lunch food options are limited, while the dessert options are extensive (and all looked amazing). I went with the BBQ Pulled Pork Bacon Waffle, because look at that thing. How could I say no? 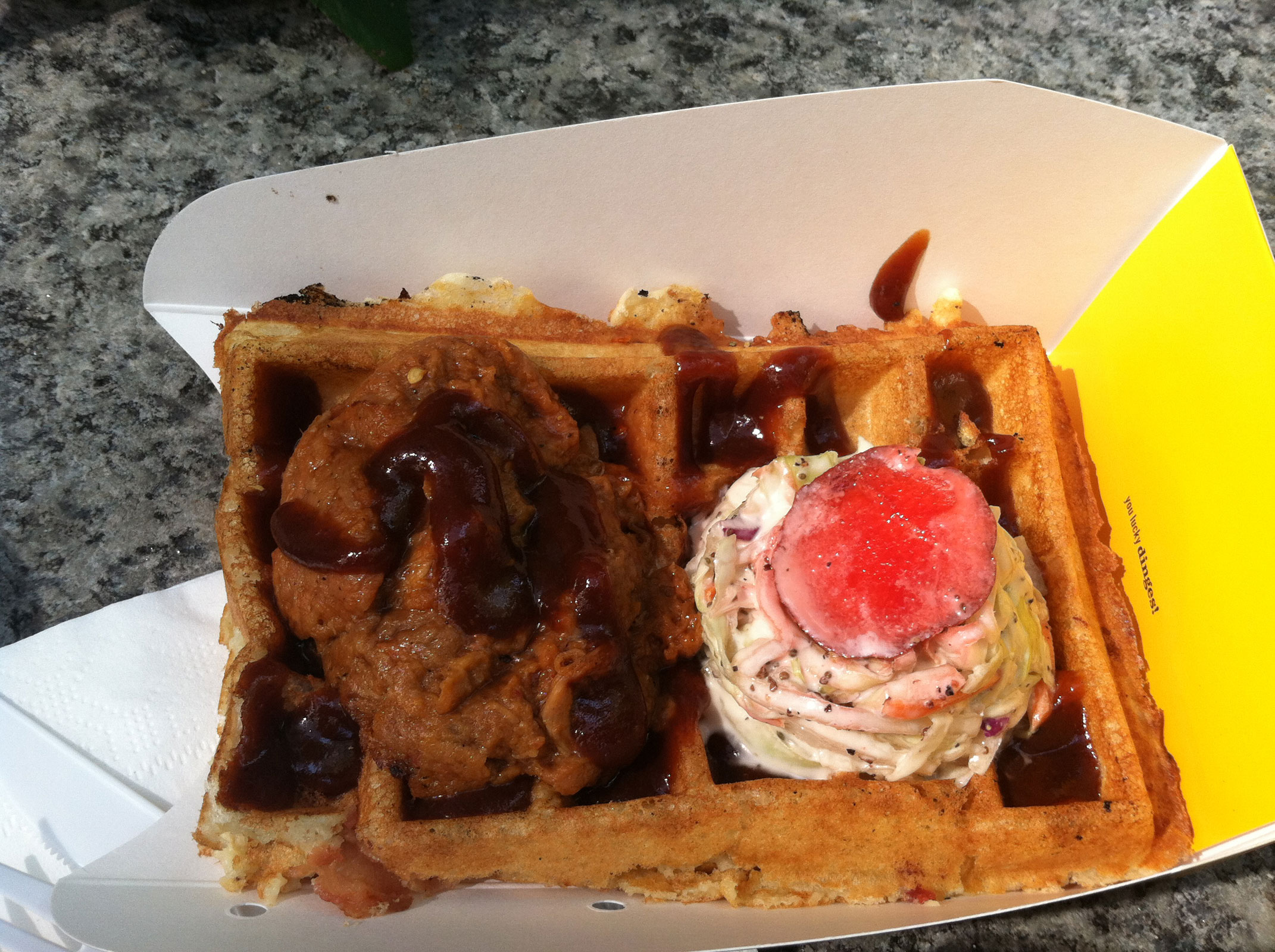 Pulled Pork and slaw on a Belgian wafflle

It was a waffle with bacon baked into it, covered half with pulled pork and half with coleslaw. There was BBQ sauce drizzled all over the waffle. As great as that sounds….it just kind of didn’t mesh. The crispy, golden waffle got a little mushy from the sauce; the pulled pork was good but was a bit odd when mixed with the taste of the waffle. It could have used more pork as only half the waffle was covered with pork, while the other half was slaw. It should have been at least an 80-20 ratio. The pulled pork is the main event here; I don’t need it to be on even footing with the slaw.  Every time I got a bite without too much BBQ sauce, I was able to taste the bacon that was inside the waffle. It was as fantastic as it sounds. But, there were very few bites without BBQ sauce. It overwhelmed the bacon to the point that the bacon was almost unnecessary.

They definitely get some major points for originality, but the equal parts slaw (which was average) and pork took some of those points away. I was still hungry after the meal, the waffle wasn’t particularly thick. I think I’ll be keeping my waffles at breakfast, or with ice cream, from here on out. I will definitely be back to try some dessert waffles. They looked too good to ignore any longer. 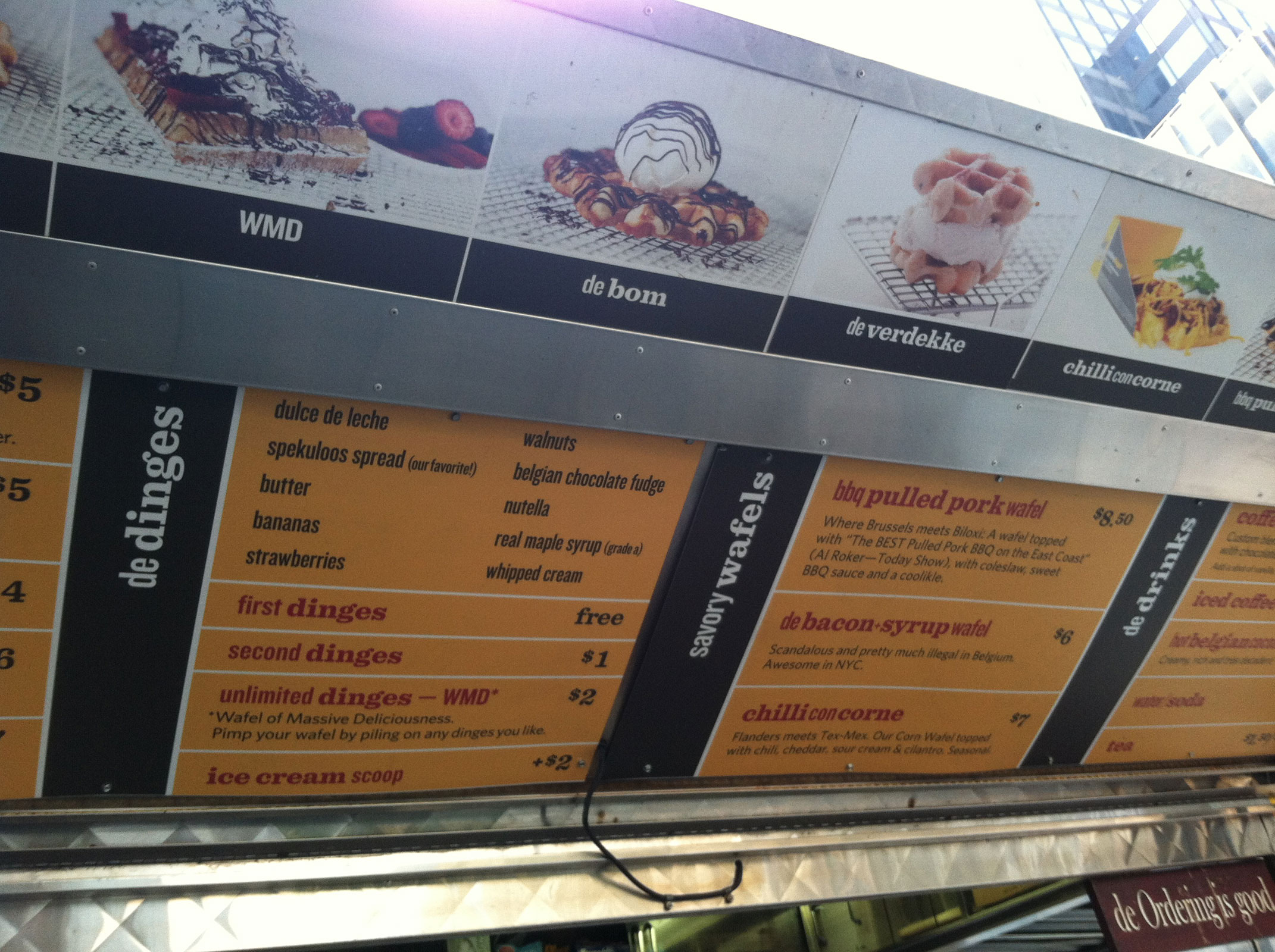 My meal was 10 bucks, which wasn’t great but it was also the most expensive item on the menu. The price wasn’t listed, so I thought it was a bit disingenuous.  The regular pulled pork waffle cost $8.50 which isn’t bad. Most of the dessert waffles cost around­­ $5-$7, which is perhaps a bit pricy for a midday snack, but not really when you consider you can’t really find this type of dessert anywhere else.

The wait was fairly long and the line was a bit confusing. But the guy serving the waffles was a character, so it made the wait a bit more bearable. He was cracking jokes and chatting with the customers as they waited. It seemed like he had a nice rapport with many regular customers.

The waffle was served in a cool, truck specific box. There was a blob of pork on one side of the waffle, and a blob of slaw on the other side. Despite my complaint of ratios in the food section, the symmetry was pretty cool for presentation purposes. The truck is loud, ostentatious, and fits the personality of the truck perfectly. They put out an original product and it calls for an original truck (or cart).